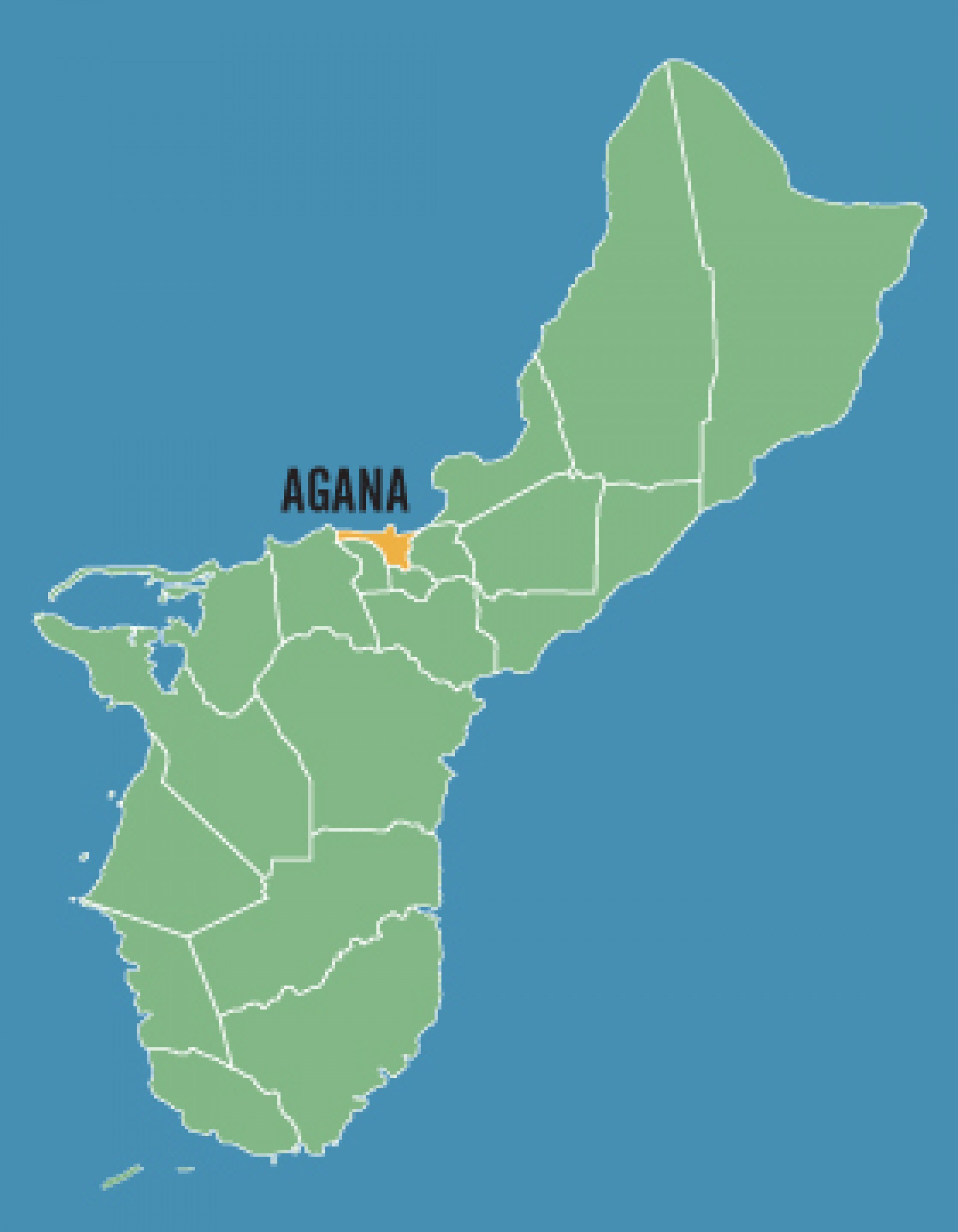 Agana is located in the middle of Guam on the Island's west side. Agana, which is often referred to as Hagatna (it's traditional Chamorro name) is the capital of Guam. In 1988, the legislature here officially changes the name back to Hagata, but you’ll still see several references to both. The latest information available identifies it as the island's second smallest village, both in terms of area and population. At one point, it was the island's population hub, but today Agana is Guam's second largest business district and the political center of Guam. The village is located at the mouth of the Hagatna River on the island's west coast. Hagatna has several highly populated regions as well as city blocks lined with shops and restaurants. Agana Heights, located in the hills above Agana, has a population approaching 4,000 residents. The U.S. Naval Hospital is located Agana Heights. Agat is a village consisting of about 5,000 residents located on the southwest shore of the island, and is the village nearest to COMNAVMAR Naval Installation. The traditions and culture of the village are largely the products of the indigenous Chamorro people who call the village home. 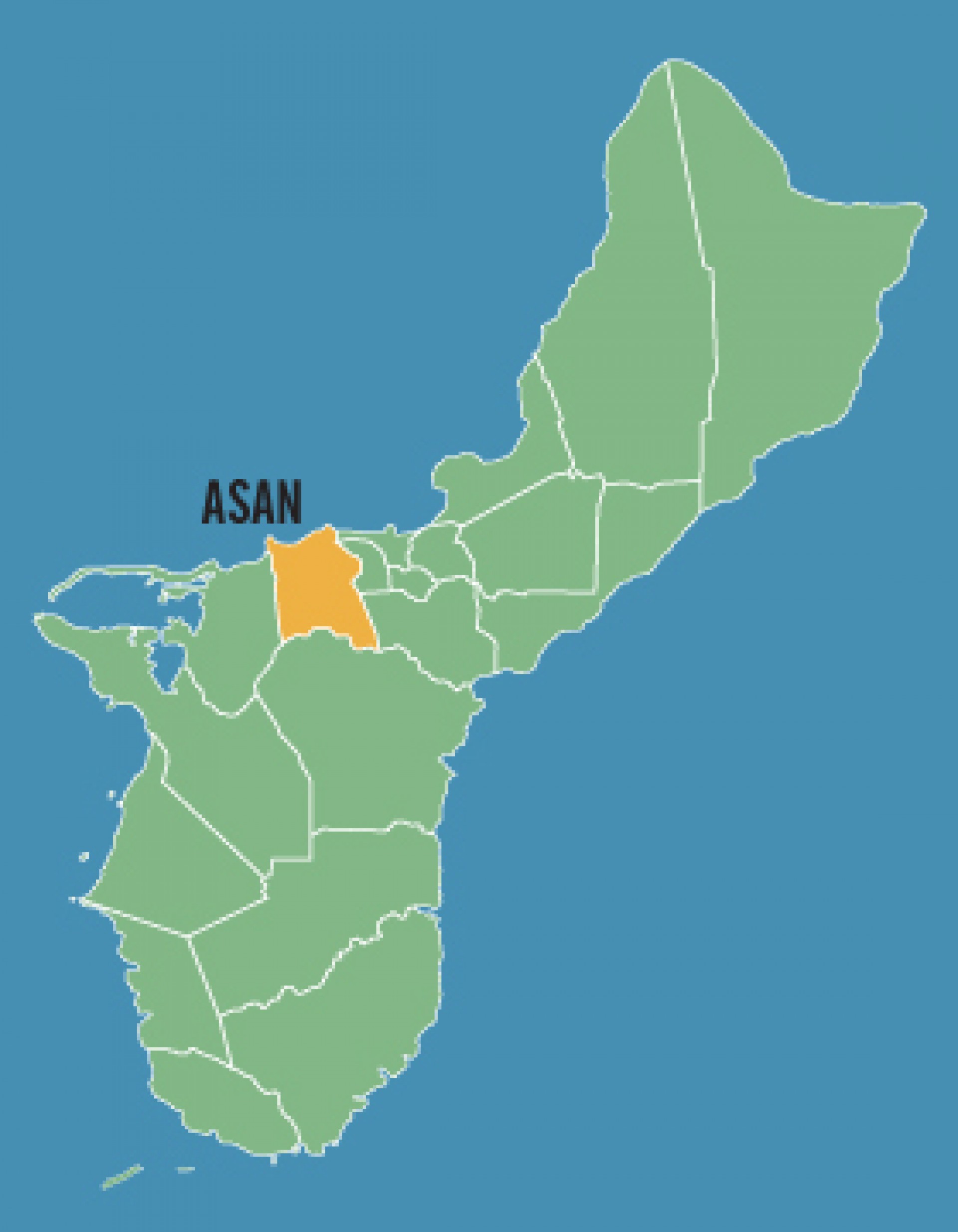 Asan-Maina is located along the western shoreline of central Guam. Each year, the village hosts the island’s largest Easter egg hunt with over 10,000 eggs hidden in the War in the Pacific National Park. Asan-Maina also plays host to the annual International Kite Flying Competitions with people from Asia participating. This village was a primary landing site for the U.S. Marines during Guam’s liberation from the Japanese in World War II. Barrigada is located in central Guam. The village is primarily residential with a few restaurants and smaller stores for shopping. The village is also ideally located as most of the island is easily accessible from Barrigada. Barrigada is also considered to be one of the most affluent neighborhoods on Guam with many homes overlooking the island or ocean. This village is located in the central Guam. The name Chalan Pago comes from the word "chalan" which means road and "pago" is the wild hibiscus trees that are in abundance in the area. "Ordat" means ants, also something that is plentiful in the village. This is the most populous village with a population of 46,000 residents as of 2004. Dededo is located on a coral plateau in the north central part of the island and encompasses approximately 30 square miles. Dededo is popular among U.S. Air Force members as a residential center because of it's proximity to Andersen Air Force Base. 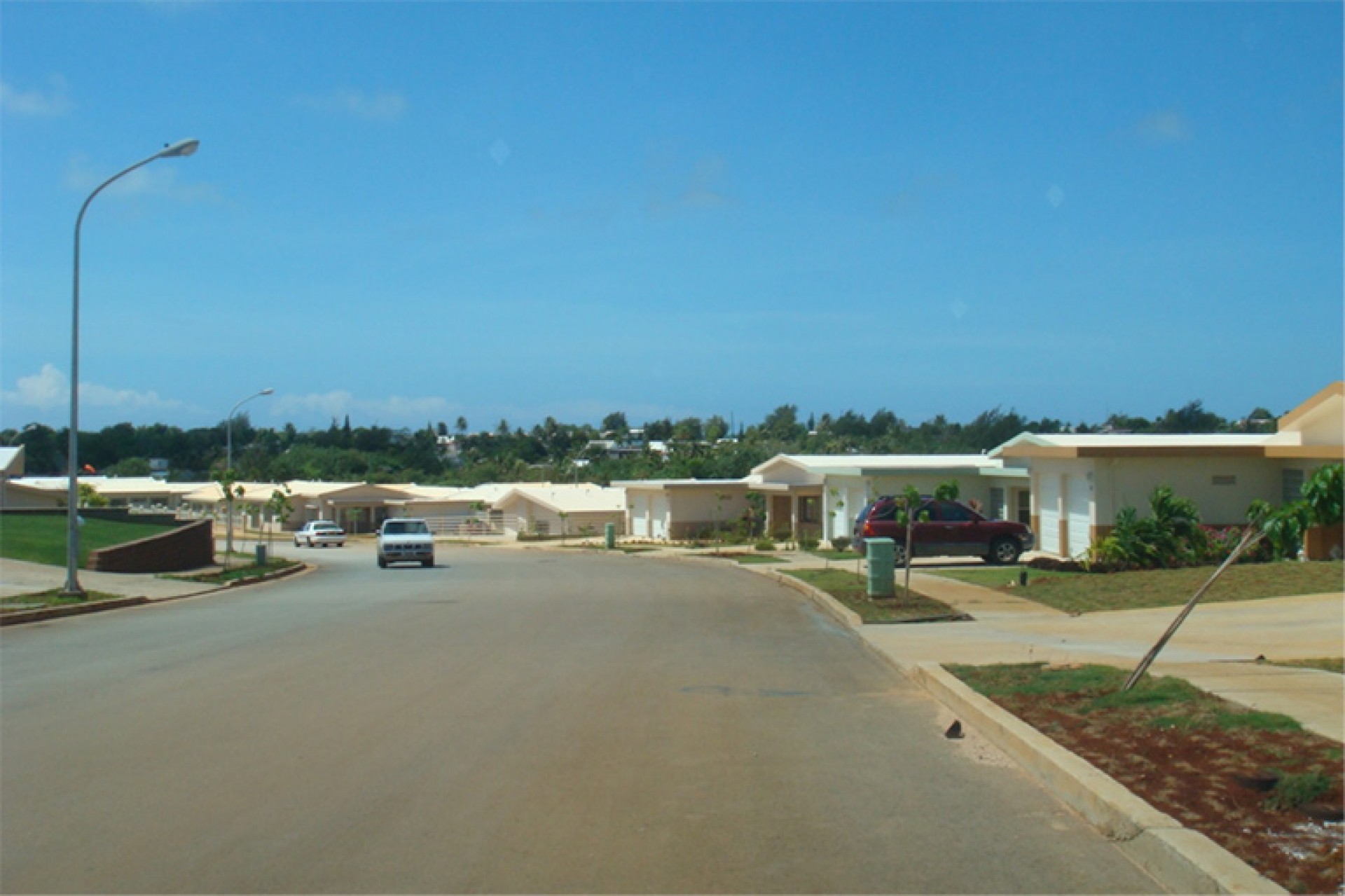 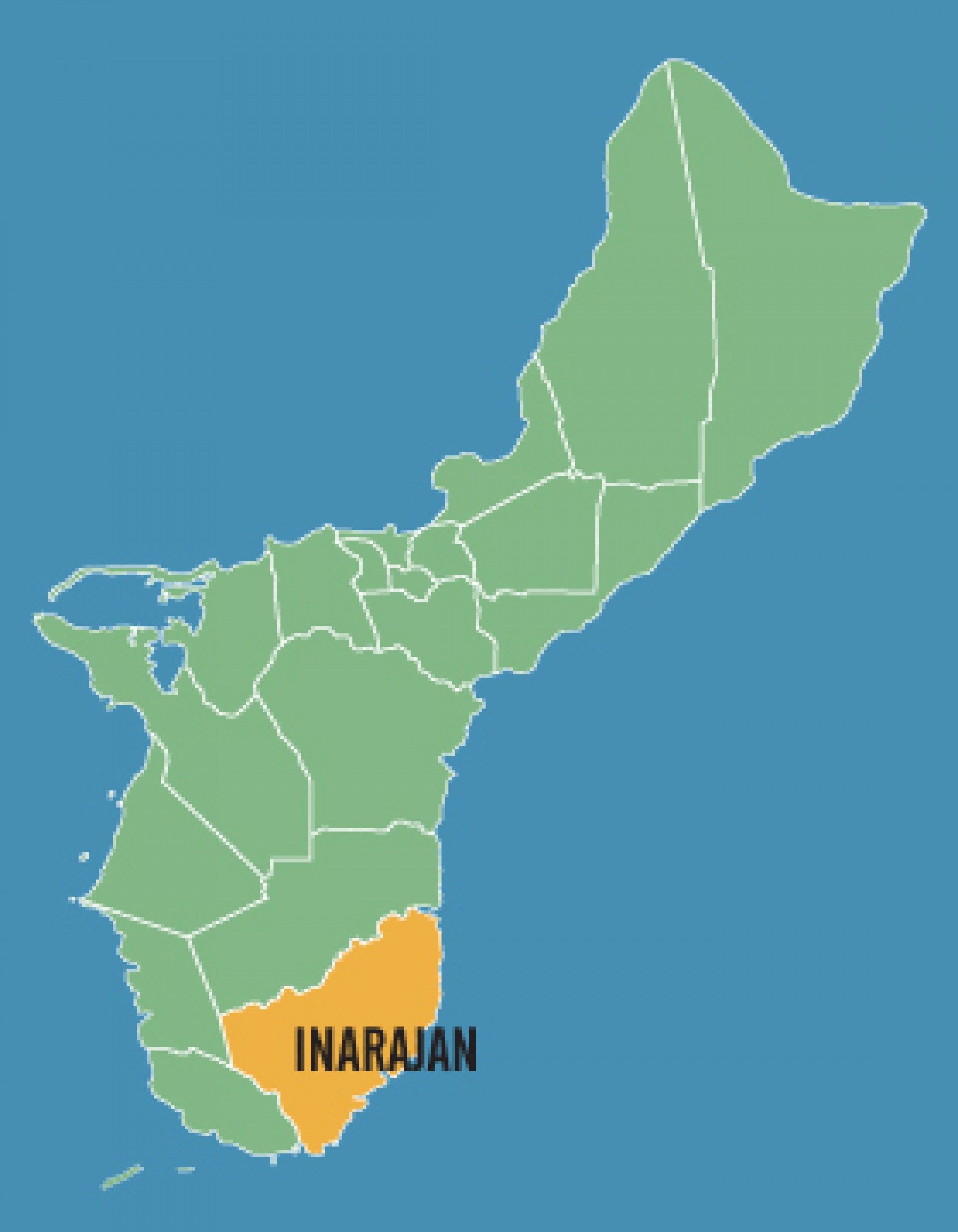 Located on the southeastern coast of Guam, Inarajan history predates the 1521 discovery of Guam by the Spanish. Today it is known for its rich history and Spanish influences. The Dandan region of Inarajan was the site of the Apollo tracking station and also boasts such areas of interest such as ancient cave paintings and historic village architecture. 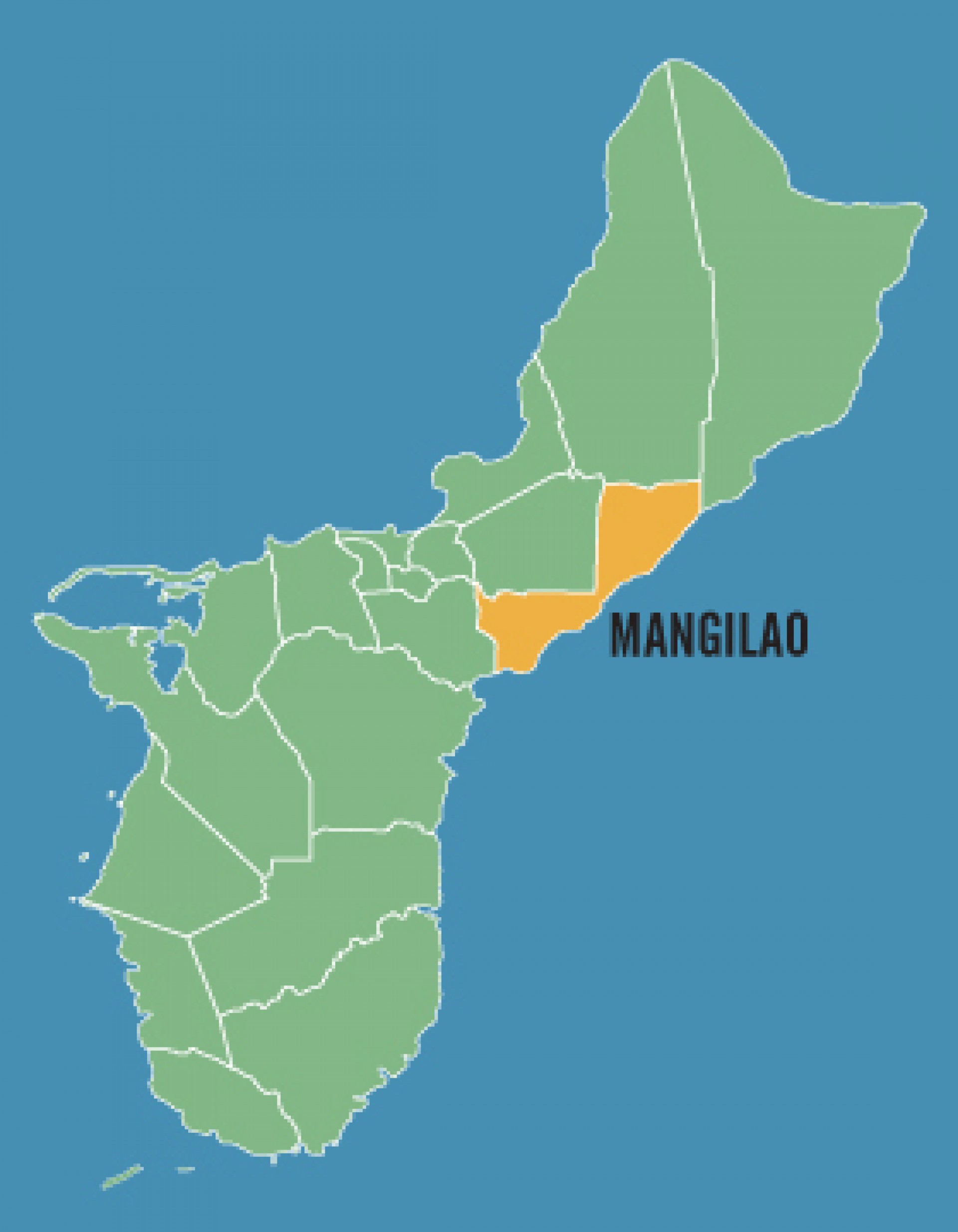 Located on the eastern shore of Guam, Mangilao offers dramatic ocean views but few beaches for recreation. Guam's main prison is located in this village as are the University of Guam, Guam Community College and Pacific Islands Bible College Merizo, which is also know as Malesso is the southern most village on the island. Covering an area of 16 square miles, the village is a popular destination for tourists with several popular dive sites located just off shore. Other areas of interest include Southern Comfort Ranch and the ferry which leads to the Cocos Island Resort. This is a combination of three separate villages east of Hagatna that was developed after WWII. Mongmong is next to the Hagatna Swamp. Toto is situated to the northeast and Maite is on the cliffs overlooking Agana Bay. This village is located on the southwest coast of Guam with hills overlooking Apra Harbor. Before WWII, the village of Sumay also occupied the area within the municipality, but it was destroyed and later abandoned. In its place now sits a U.S. Naval Station. The village of Santa Rita is located on the western shore of Guam. The commercial port of Guam, several power plants and a number of historical sites are located in the village. Sinajana is located in the hills south of Hagatna. This is one of the few villages urbanized as a result of the federal urban renewal program. Sinajana is also home to a natural spring and many small creatures such as frogs and turtles. This village is located in the hills along the southern part of Guam's east coast. Talofofo is a popular tourist spot with attractions such as Jeff’s Pirate’s Cove Restaurant and Museum, Talofofo Caves and Ipan Beach Resort. Tamuning is located along Guam’s western shore. The village is considered to be an economic center of the island. Tamuning is also home to the Antonio B. Won Pat International Airport. Also located here is Guam’s only civilian and government operated hospital. Five countries including Japan, Palau, Philippines, South Korea, and Federated States of Micronesia house their consulates in Tamuning. The Village of Tumon, located in west central Guam, is our tourist district. Here is where most of the business focused on tourism are concentrated. From high end shopping at Duty Free and Tumon Sands Plaza for your next Rolex or Louis Vitton hand bag, you can walk to a number of restaurants including Hard Rock Café, Outback Steak House, Planet Hollywood and TGI Fridays. There are also many restaurants serving Asian style food from noodle houses to sushi bars. Almost all of Guam’s resort hotels are located in Tumon, most have daily buffets but are at premium prices. Keep in mind that most things in Tumon are at tourist prices. Locals and military get discounts in many cases to bring the prices back down to "normal." Located on the southwestern coast of Guam, the village’s name is believed to come from a Chamorro word meaning to catch guatifi or a type of fish. Every year, the Discovery Day festival is held in Umatac to mark and celebrates Magellan’s discovery of the island in 1521. Yigo is the northernmost village of Guam and home to Anderson Air Force Base. Covering 35 square miles it is the largest of Guam's villages. Yigo's soil is rich for coffee, cocoa, pineapples, oranges and tangerines. During WWII, the village was the site of the island's final battle. It also housed a concentration camp during Japanese occupation of the island. Yona is located on the eastern side of Guam and is mostly residential. Yona has traditionally been a farming community but today one of the island's most popular golf courses along with Leo Palace Resort are located in Yona.